A legless veteran and his Vietnamese girlfriend embark on a cross-country journey through the dark heart of mid-1980s America to exact revenge on the loathsome Monsanto Corporation, whose Agent Orange decimated both their lives.

********
From the illicit pharmaceutical underworld of San Francisco’s Tenderloin to the cocaine-dusted film set of amputee porn in booming Las Vegas; from the urban-industrial hideout of vegan militant black revolutionaries to a botched backyard lynching by Texas frat boys and the liberation of their chained, abused pit bull. . . Orange Rain hurtles from one stunning scene to the next, swaying between the hilarious and the hideous. Its humor is darker than the Marlboro Man’s coffee (and his lung cancer). A wildly twisted novel, but also one with undeniable heart and compassion. It is an ode to humans’ ability to endure in the face of horrific suffering. A celebration of feminine strength and spirit. You’ve likely never read anything quite like it.
******* 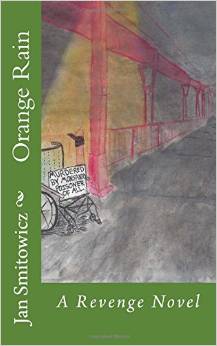 “The eco-warriors next door embark on a lightning round of vigilante justice. Orange Rain is what happens when the Monkey Wrench Gang goes Death Wish and moves from the scrubland to the streets. Literature that incites.” -Peter Young, former ALF prisoner, chief editor at Animal Liberation Frontline

Thanks to my wonderful, egalitarian, vegan-owned, Eco-conscious publisher Trebol Press for taking this on! www.TrebolPress.com

“Orange Rain is not a politically correct novel—which is why it is so appealing . . . [the main] character has a clear revenge mission he never wavers from. Revenge is exacted on more than one oppressor, including two different rapists . . . [It’s] the type of book that could never be published by a mainstream publisher, as they would be too afraid to touch the taboo subjects it contains. Jan Smitowicz’s first novel . . . is fast-moving, fun to read, and isn’t the same old tired thing we see coming from traditional publishers.” -Kimberly Steele, author of Forever Fifteen and other novels

“A compelling, fast-paced adventure through some of society’s most intriguing subcultures . . . filled with incisive political commentary. This timely and important novel is a must read for anyone concerned about the state of the planet, or simply looking for a good read.” -Camille Marino, former political prisoner, founder of Negotiation is Over and Eleventh Hour for Animals

“An exciting new author with a new voice to bring to the world of fiction. The literary world is in desperate need of more writers like him.” Veronica Rosas, playwright