This post brings together two seemingly disparate topics which in reality connect well together.  I’m putting them in one post because I happened to do the two separate things on the same day (UC Davis animal research protest with the Open the Cages Tour and a nature and arboretum walk).

First we got our protest on at the despicable California National Primate Research Center; there were young activists in their 20s like myself, and people who have been protesting vivisection since before many of us were born (perhaps it’s long past time we as a ‘movement’ reevaluate the tactics we support and advocate?).  A great mixture of old-school and new-school coming together.

One of the tourers got some good messages out there as he was interviewed by two separate local channels (I don’t know how much they actually showed–my guess is not-much, but such is the way of the world).  He was eloquent and concise, although I do wish he’d talked not just about primates, since rats and mice constitute 95% of the animals used in vivisection, and they suffer unfathomably as well; of course, it was a protest focusing on the Primate Research Center, but there’s nothing wrong with mentioning the millions of beautiful, sweet little creatures (I’ve had rescued pet rats for the last 5 years, and they’re wonderful and amazing companions!) who aren’t even covered under the already-pitiful and rarely-enforced Animal Welfare Act.  That’s right, the AWA excludes all rodents, so they’re basically like naked soldiers walking into a nuclear test range.

I also got to get a little megaphone time; I already have what they call “megaphone mouth,” meaning the ability to make my voice very, very loud, so I’m hoping the monkeys in their tiny cages could hear me calling for their freedom from their Nazi imprisoners deep behind the walls of the torture chambers.

Tonight the Open the Cages Tour will be having an Animal Rights workshop in Seattle, and tomorrow there will be a protest at the University of Washington.  Then it’s farther on up the Best Coast to Vancouver!  Here is their tour schedule.

After that, I met up with a friend from college, Kirsti, whom I haven’t seen in nearly three years.  She’s a major plant enthusiast and has a degree in Biological Science with an emphasis in Ecology and Evolutionary Biology, so she taught me a LOT about plants; usually I’m the one telling others about the natural features of an area, so it was very nice and humbling to be schooled; hopefully I can impart some of her impressive knowledge to you, Dear Reader.  First we went to the Yolo Bypass Wildlife Area, just outside Davis, where we saw some lovely flowers, snowy egrets and a great blue heron, red-winged blackbirds, and swarms of beautiful dragonflies above our heads.

Kirsti says:  “Most people think that the sunflower is a single flower, but actually it is a composite of numerous florets (small flowers). Each single outer petal is actually a sterile floret, and the real flowers are arranged in the center in a beautiful Fibannochi pattern to maximize packing of seeds after they are fertilized.”  So cool!  I never knew that–had no idea.

“This showy orange flower is a south African plant called Wild Dagga. The plant’s modest water requirements and ability to attract hummingbirds makes it a popular ornamental in the Central Valley and Southern California.” 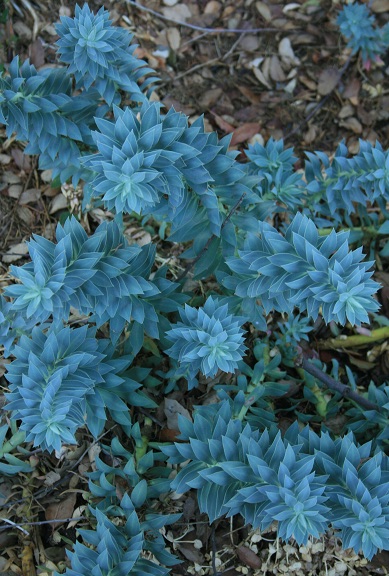 We couldn’t figure out what this plant is, but its geometry is so stunning and even psychedelic that I had to include it.

“[This] succulent is a hybrid of Echeveria elegans and it is being showcased in a garden filled with hand-picked “All Stars” chosen by the Arboretum Master Gardener staff for their ability to flourish in Davis and the Central Valley with minimal upkeep.”  I referred to the Echeveria as the “dancers” because the flowers look like they’re swing-dancing!

I was a little conflicted about posting a single non-native plant picture on this blog (the Wild Dagga), but Kirsti can provide a scholarly interpretation of the arboretum’s general ecological soundness; obviously it has value in teaching people about plants, but you always have to ask, At what cost?  Like how zoos can teach us about animals, but at a horrific cost to the animals and our own psyches (on this topic, I cannot more highly recommend Derrick Jensen’s beautiful, heartbreaking book, Thought to Exist in the Wild:  Awakening From the Nightmare of Zoos).  But this arboretum is a good one.  As we come nearer and nearer to a post-oil world, learning about and propagating plants is becoming immeasurably important.  I’ll let Kirsti take it away!

“As climate change threatens the [Central] Valley with increasing water shortages, the Arboretum emphasizes the practice of xeriscaping, aka green landscaping– or designing gardens that use plants that reduce or eliminate the need for irrigation. [emphasis added]

“Using native plants is one obvious tactic, as they are already adapted to the particular water needs of the region, and their presence supports the myriad insects, birds and other organisms that exist in the native community. Although most exotic plants tend to require more maintenance or water than natives, the Arboretum has done a great job of identifying specific drought-resistant exotic plants from other countries that synergize with the Central Valley’s climate.

“Invasive species are a real problem because they compete with native species for space and resources and might possess novel qualities that allow them to proliferate out of control and wipe out scores of native species and communities in their wake. Although some exotic plants may be beneficial in green landscaping, it is important to remember that these seemingly isolated plants start as source population for spreading beyond your garden, and this may have tragic consequences to the local ecosystem. In the interest of protecting native communities, the real focus should be on landscaping with native plants that are relatively beneficial to the native community in the event they escape beyond your garden.” [emphasis added]

Beautifully rendered explanations, Kirsti, thank you so much for your input!