I was only planning on doing a single Mono Pictorial, but a couple weeks ago I finagled myself a tremendous opportunity:  David Carle (whom I quote in the first Mono Pictorial), agreed to meet with me for an interview!  We emailed back and forth about it a couple years ago before I got locked up, but it never panned out because of my legal troubles.  But he remembered me, and agreed to meet with me on my way down to Southern California–the next day!!  So I had to haul ass and leave a day early, drive through Yosemite–and barely stop at all in that cathedral of wonders, because I was running late–to meet with him on time.  He even let me crash at his place, which was wonderfully kind and compassionate (I would’ve otherwise had to try to sleep in the trunk and back seat of my tiny Corolla, which would’ve been liquid hell on my knees and back).  AND he gave me free copies of his two novels!  I plan to review Spotting Scope, his newest, hopefully for print publication.

Anyway, I got some gorgeous pictures and information to go along with it, as Mr. Carle was with me most of the time.  Hope you enjoy!  (Terrific interview and Spotting Scope review to come in due time) 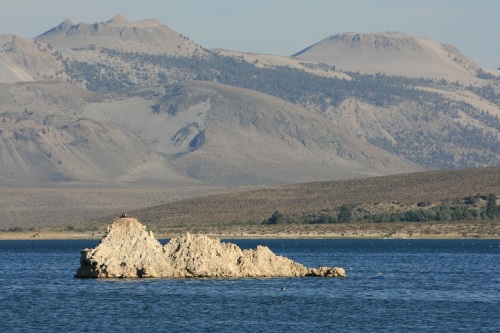 This tufa is at least half a mile away; notice the peregrine falcon nest on the leftmost rise, with baby atop! The ridges in the background are a couple of the Mono Craters. 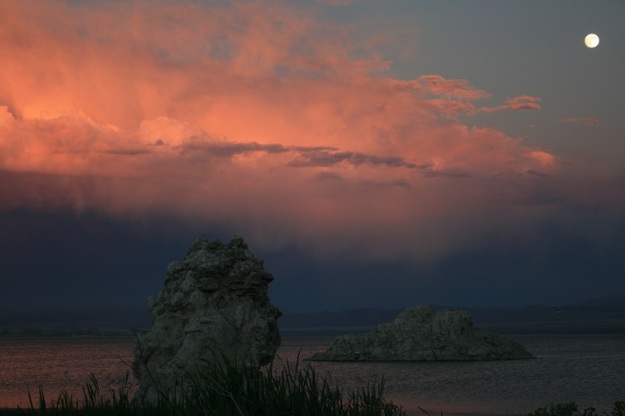 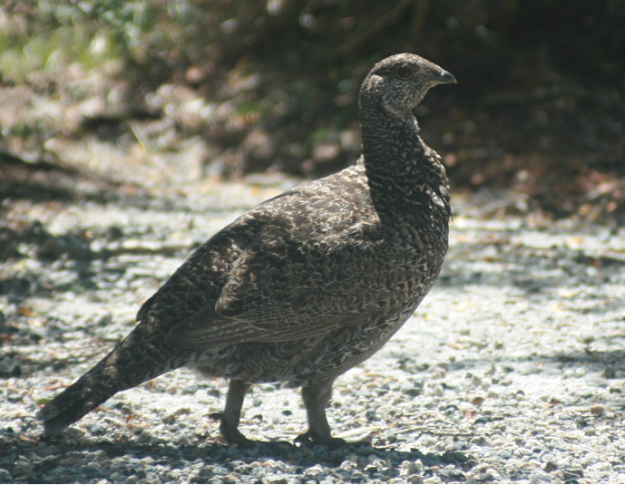 I think this is a Ptarmigan, in the Grouse family; this individual I spotted in Rock Creek Canyon.

The Mono Lake Committee, of which I am a former and future member, does TREMENDOUS work.  I have three of their bumper stickers (which they give away for free at their Center in Lee Vining, right across from Mono) on my car.  Here is a link to their information about Mono Lake/Basin birds.  It is a great organization that does a huge amount for the imperiled Mono Lake. 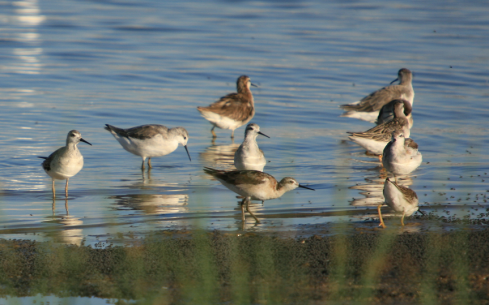 Phalaropes on the northern shore of Mono. Many thousands of them (both Wilson’s and Red-necked Phalaropes) stop off at Mono on their annual migration…

“Of all the birds that come to Mono Lake, the Wilson’s Phalarope stands out as the hardiest traveler.  These small shorebirds, not much larger than a fist, arrive at Mono Lake in mid-summer after breeding in the northern U.S. and southern Canada.  At Mono Lake they molt their feathers and double their weight after several weeks. By the middle of September they have mysteriously disappeared. Leaving in stages during the cover of darkness, they depart for a journey that takes them all the way to South America. The fact that these birds fly over 3,000 non-stop miles to South America is amazing enough, but what is truly astonishing is how fast these little birds reach their destination–an unbelievable 3 days!”   [emphasis added]

-From the Mono Lake Committee 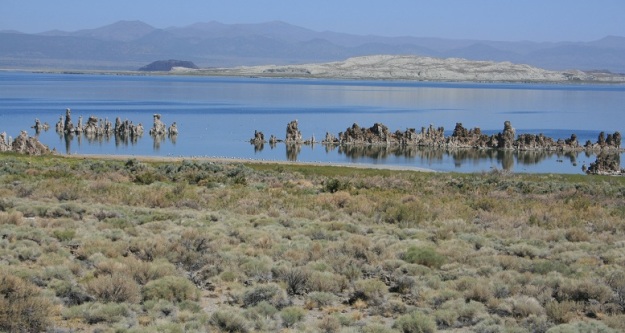 South shore tufa and, in the background, one of the main islands in Mono, called Paoha–itself a volcano! It therefore has tons of geothermal activity, including hot springs–I dream of one day canoeing the 3-4 miles out there and spending the night on Paoha. 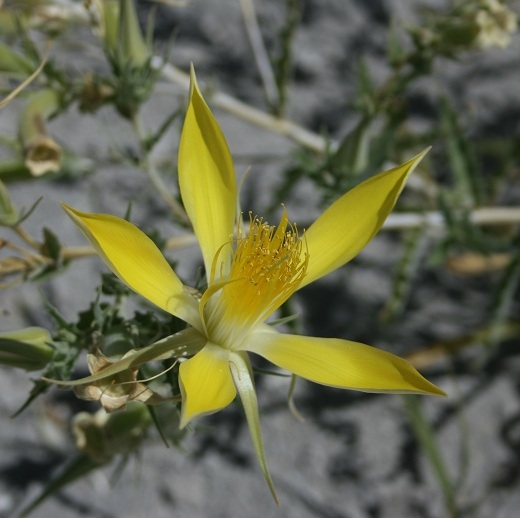 Blazing Star wildflower near south shore. David Carle said he’d never seen such a large “grove” of these flowers in the vacinity, dozens of bunches of them. What a special time for me to happen to be in Mono! 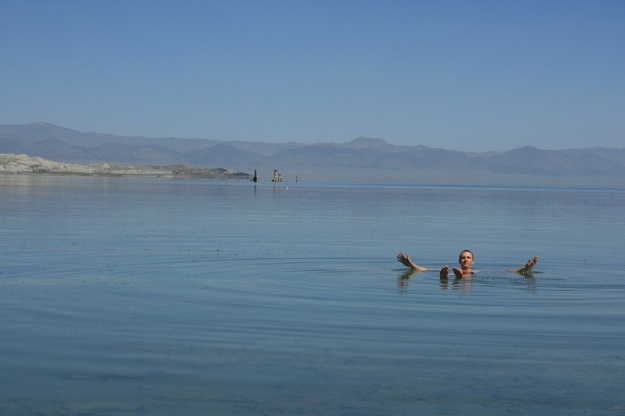 Doing the “Mono Float.” The water is so dense with salt and other minerals that it holds you up with no effort on your part. An amazing feeling like no other.

This shows some of the strangeness of the lakeshore.

See the black band in the middle-bottom of the picture?  Those are a few thousand of the literally TRILLIONS of alkali flies at Mono, specially adapted to survive, in a symbiotic relationship with the brine shrimp, with Mono’s unique chemistry.  According to Carle, scientists recently determined that Mono Lake is, in terms of sheer biomass produced, the most biologically productive lake in the WORLD. 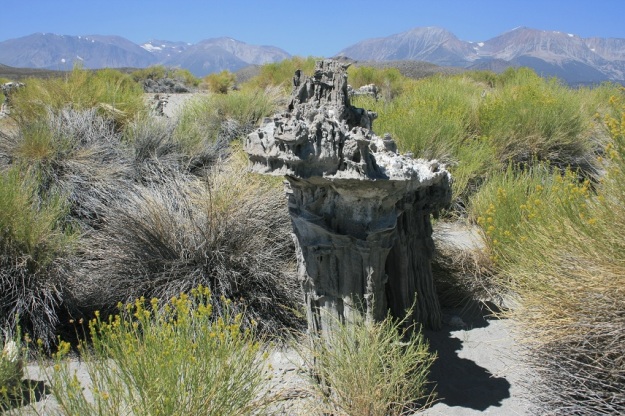 “Sand Tufa” near the south shore. You have to know a little bit about these amazing structures to heighten your appreciation… 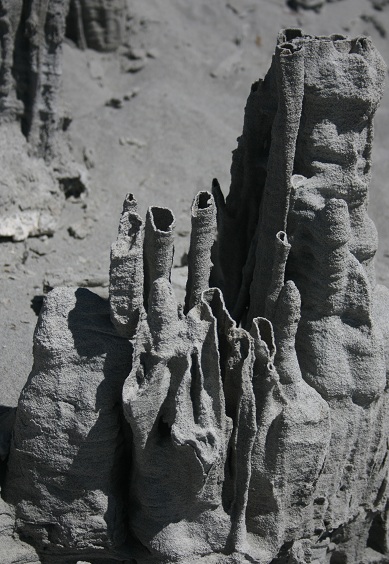 The underground springs bubbling up minerals contribute to forming these hard, hollow tubes that form the sand tufa. 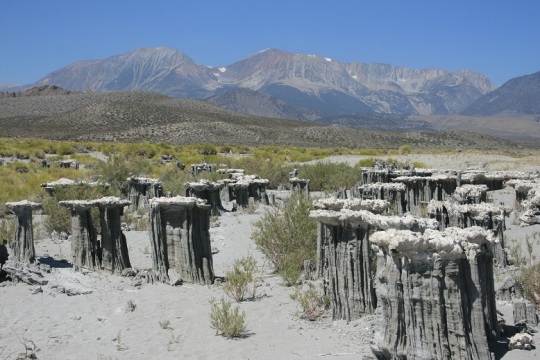 Sand Tufa “grove” and the mighty Sierra Nevadas in the background! 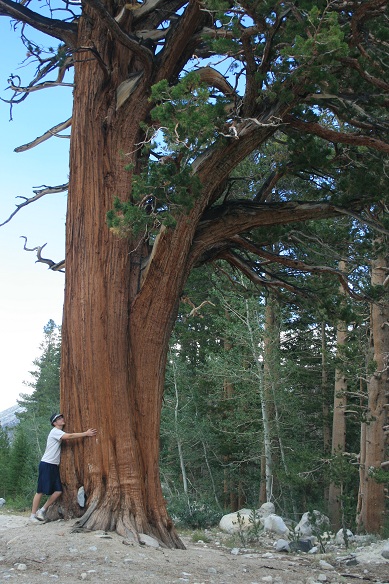 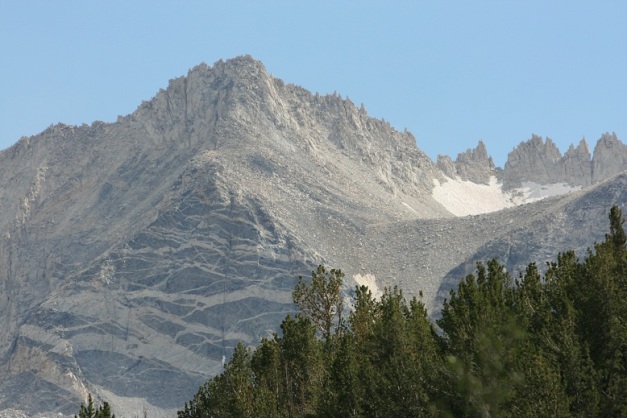 Until next time, hope you enjoyed this week’s Pictorial Highlight of the Mono Basin, one of my most beloved bioregions of this incredible part of the our amazing Earth.