Today I was feeling extremely depressed; among other reasons, both situational and neuro-chemical, my third novel, Redwood Falls, was rejected by what I and many others who’ve read the book thought would be the *PERFECT* publisher for it, Ashland Creek Press (they’re actively seeking eco-literature).  My work has been rejected hundreds of times and I’ve developed pretty thick skin, but this one really stung hard.  It truly seemed like the perfect match.  I wonder if the material was too radical for them?  It’s going to take somebody with serious chutzpah to publish Redwood Falls, as it involves tree-spiking, knocking down power lines, sabotaging railroad tracks, and bombing oil refineries–a sort of modern-day Monkey Wrench Gang, but more radical (more extreme ecological problems demand more “extreme” methods of combating the problems!), and with more of a literary bent–I’m not saying my book is better than The Monkey Wrench Gang, I’m just saying the narrator Foster is a tortured writer whose mother (a painter) will do ANYTHING she can to keep him from writing, because she is terrified he will end up an addict or a suicide, like so many other writers and creative people in general.

My apologies for the tangent; it somehow felt relevant.  So I decided that I needed a little time in nature to soothe my tormented psyche.  I took my shirt off (gotta get dat Vitamin D!), leashed up Rikki, and walked the half mile to a nice spot at the nearby Sonoma creek.  It was so very peaceful and cathartic and healing.  I sat in the calm, cool water.  I threw stikkis for Rikki.  She chewed on them, and I watched her nosh at the creek side salad bar, as she is wont to do.  There was a 20-foot blackberry bush overhanging the edge of the creek at one place; I found some of the ripe ones and ate them straight off the branch.  They were exquisitely sweet and juicy and just a tad tart.  There’s nothing like picking and eating wild berries right off the plant.  Some of them I ate straight up, some I dipped in the creek to clean off–I wonder which is better?  My mom is always worried I’ll get giardia, because I make a point of at least tasting, if not drinking, all fresh water I swim in that seems reasonably clean.  Hey, I’m a mostly-healthful-eating vegan–hence I’ve got a dynamite immune system, and the creek and river and stream water hasn’t hurt me yet!  It’s probably less dangerous than drinking most municipal tap water, given the prevalence of flouride (an INDUSTRIAL BYPRODUCT of fertilizer manufacturing) and chlorine and other pollutants. 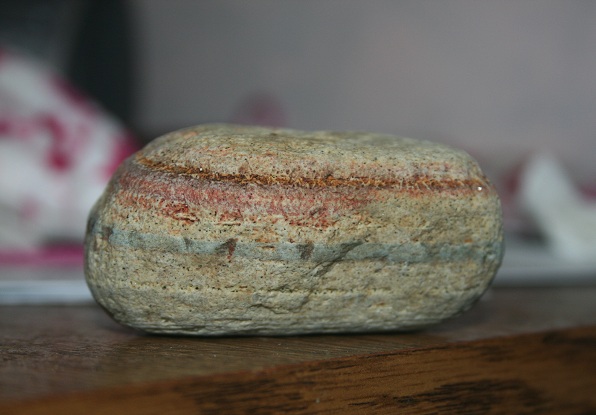 Beautiful rock I came across in the creek.

My favorite part, though, was when I sat on a little boulder jutting out of the creek side and stuck my feet and shins in the water.  Dozens and dozens of minnows, beautiful, graceful little fish, came up and began nibbling on my toes and feet and legs.  It tickled a little, but felt nice, too.  It had been a couple days since I showered, so they were probably munching off bits of dead skin (Your first reaction is probably, “Gross!”  But truly, it’s a beautiful thing!)  I felt very connected to my local ecosystem in that moment, with juice from the blackberries still sweet on my tongue and the sun heating my bare flesh and my legs pleasantly cool in the water.  And that is so important.  I’ve been to National Parks and felt less connected to the place than I did to this relatively meager little locale; and yet it’s close enough for me to walk to, even with my fucked up knees.  We don’t need to travel far (and soon enough, when automobile culture “crashes,” we won’t hardly be able to!)–to have a marvelous nature experience.  Get to know your local bioregion; it may be the difference between Life and Death when our umbilical cord to industrial water and food is severed by ecological collapse.

I also picked up trash–EVERY DAY is nature clean-up day when you’re an Environ-meddler!!  I ended up with three plastic grocery bags (one of which I was able to salvage to pick up Rikki’s turds with), a big plastic garbage bag, an unidentifiable chunk of clear plastic, bottle caps, an Arrowhead plastic water bottle (think about that one for a second and you might glean one of the pathologies of civilization), an aluminum beer can, and a whole fucking folding chair, buried in about two inches of mud and rocks on the creek side–who knows how long it’s been there!  And it’s still in perfect working order, I might vinegar the shit out of that bitch and bring it home for the porch!

Doing all that made me think that, when you get right down to it, a big part of environmentalism is cleaning up the SHIT–literal and figurative–left behind by the assholes who came before us.  Whether that shit is actual shit, or nuclear waste, or pollution in the air/water/soil, that’s what it comes down to.  (If you want to learn more about what industrial humans leave behind, I highly recommend What We Leave Behind  by Jensen and McBay, and Garbage Land  by Elizabeth Royte.)

But this is the absolutely essential part, so PAY ATTENTION!:  It is not enough to merely clean up the shit left behind by humans.  Because we can never get it all!  What we have to do is ***STOP THE SHIT FROM BEING MANUFACTURED IN THE FIRST PLACE.***  In other words, if we want life on Earth to continue with any kind of diversity, we MUST hinder the smooth functioning of industrial syphilization, with the ultimate goal of dismantling it wholesale.  That’s it.  That’s the only way we’re going to stop the current Mass Extinction of plants and animals underway, caused by industrial civilization.

Rikki, NOT pleased at the prospect of a post-creek bath.

6 thoughts on “Explore Your Bioregion!”